Hidden in the depths of the huge and bustling city of Hong Kong, there is a family of four who are comfortably relaxing in a homely retreat which gives them a sense of peace amongst the chaos.

Key to this Australian family’s peace of mind is knowing their home has been built around the concepts of functionality, whilst keeping true to their eccentric aesthetic.

“Everything in the home was designed for multiple functions,” says Rosie Blay from Liquid Design, who was the interior designer behind the space. “One issue for the family was storage, so we designed a large dividing unit in the living space that accommodates that massively.”

Aiming to incorporate impact alongside the practical elements of the home, Rosie opted to install two EcoSmart burners in the middle of the 4.2m long dividing unit.

“It’s such a large bulky piece, so we thought it would be nice to open it up and have a feature inside,” she explains. “This is where the EcoSmart burner came in. We thought it was a perfect match for our design.

“On the lounge side the unit acts as a home for the television and equipment when not in use, and it also creates a sense of privacy as you can’t see directly into the lounge when the front door is open. The burners take the piece from ordinary to extraordinary.”

"The burners take the piece from ordinary to extraordinary."

By choosing two burners rather than one, Rosie ensured the flickering flames can be seen from both sides of the dividing wall, providing a focal point for both the lounge space, entranceway and hallway.

It wasn’t only the aesthetics of the EcoSmart burner that had Rosie hooked; the practicality of the unit also appealed to them, as they didn’t have to mess around with flueing or any other form of tricky installation.

“We had no problems whatsoever with installing the EcoSmart fire burners,” she says. “We are so pleased that we are planning to use it in our other upcoming residential project on the rooftop as a coffee table-come fire place.”

The design for this particular home was based around natural and earthy materials, including reclaimed wood and the element of fire, plus touches of teal blue mixed into the décor.

“The design brief was to create a healthy family home for their children to grow up in,” explains Rosie. “We believe we fulfilled this by adding many design features that promote health and wellness.

“We installed new windows that were double glazed with low-e film to keep the warmth in in the winter and keep the heat out in the summer.

The EcoSmart burner is also effective in adding that extra bit of warmth in the winter time. We also love how the burner is eco-friendly by only burning bioethanol.”

The environmental aspect was a distinct selling point for Rosie and the client. In addition to choosing EcoSmart for its clean-burning flame, they prioritized repurposing some of their existing furniture in the rest of the home.

“The clients’ style is very eclectic,” says Rosie. “We mixed original pieces from their old home with new and custom made pieces.

“The mix of furniture works well around the divider, which is a honeycomb metal covered in beige stone veneer. We felt that the fire was a great element to add to these materials as it really created that cozy/homely feeling.”

Thanks! We received your enquiry. We'll have the best person connecting with you.
We aim to get back to you in under 24 hours - if this timeline doesn’t suit your immediate needs, please do not hesitate to contact us by phone 0333 444 0623.
Look Book #6 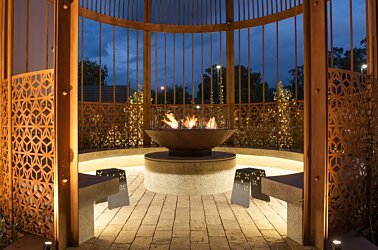 Focal Points Junction Moama, a restaurant and dining space located on South Australia’s Murray River, prides itself on using local produce to create superb food, wine, cocktails and craft beer, and providing a stylish venue for friends and family to gather to enjoy these specialties. 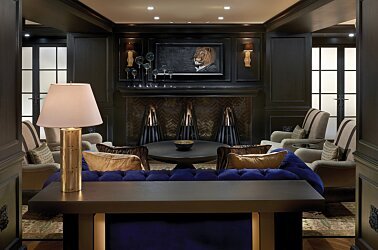 Theatrical Elements When you think of theatre, what comes to mind? Drama, glamour, music and movement – these are just some theatrical elements the award-winning Simeone Deary Design Group captured in their redesign of the boutique Allegro Hotel in the heart of downtown Chicago.

RAW Design An “opulent New York loft with raw aesthetics and industrial elements” – this is the vision renowned Australian hair stylist Anthony Nader had for his refurbished salon in the trendy inner Sydney suburb of Surry Hills.

Firing Up Design EcoSmart burners and fireplaces have the finest, most beautiful flames of all ethanol burners – having an impactful and beautiful flame was one of the main criteria we wanted to fulfil. Our client loved the implementation of EcoSmart fire. 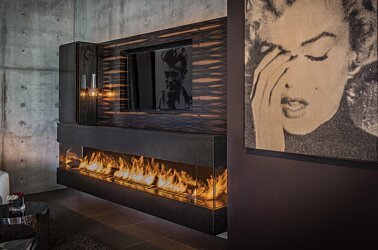 Ribbon of Fire How do you bring a sense of warmth and ambience to a living room built of concrete, steel and glass while maintaining a sense of continuity with the home’s design?

Gathering Place Fire is synonymous with celebration; it comes in the form of softly flickering candles at a formal dinner, a warm, crackling fireplace at a family gathering, or even the spark that sends fireworks shooting into the sky on New Year’s. 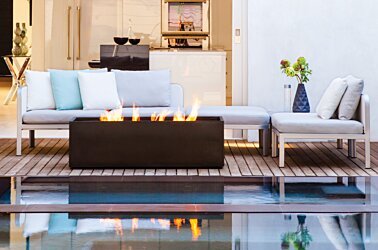 Powerful Partnership Revered in the Unites States as the first company to create furniture for full-time outdoor use, Brown Jordan is known for distinctive silhouettes that enhance “traditional, transitional and contemporary environments.

Bohemian Chic A focal point for a bohemian chic penthouse and a great accent to a modern bachelor’s apartment; Kara Smith from Smith and Firestone Associates Luxury Interior Design may have been looking for two completely different missing pieces when designing two suites for the Residences at W Hollywood, but she found one common solution.
Contact Us Our team of fire specialists can clarify
any questions you may have.

Business Programs Exclusive programs designed to fit the
needs of our valued partners.

Downloads Designed to inspire and assist you
with the product selection

Why Flex? A great interview that explains
the main benefits of Flex.

Yes! We got your message. Our team
will get back to you soon.