Celebrating its 80th anniversary this year, the magnificent Manchester Unity Building has a special place in the history of Melbourne and the hearts of its citizens. So when Dr Kia Pajouhesh, managing director and principal dentist of Melbourne-based Smile Solutions and Chairman of the MUB Owner’s Corporation, took on the task of restoring this building to its original beauty, it was the beginning of a labour of love.

The building’s boardroom is considered to be the most intact Art Deco Boardroom anywhere in the world. It carries a separate heritage listing to the rest of the building, and far from being a redundant showpiece, it is a functioning boardroom.

"In many ways the boardroom is the jewel in the crown and offered us an opportunity to not only restore it to its original splendour, but to rejuvenate an aesthetically beautiful and authentic room."

The boardroom restoration was made easier by a number of features, such as the stunning fireplace, remaining intact and the boardroom table in situ – primarily because previous developers were unable to move the almost six metre Queensland maple cross-banded with rosewood table.

The magnificent indoor fireplace occupies a distinct nook in the boardroom and was originally built as a decorative feature without a chimney or any other means of extraction. The fireplace consists of an interior of white polished marble tiles, a mantel of carved marble and a hearth of contracting pink veined marble. The grate and decorative glass stones were disposed of and a granite platform was installed. The only element missing was an actual fire.

The challenge was to find a live-burn fire system that could work within the physical constraints of the room and not challenge the heritage overlays.

An EcoSmart Fire was chosen because of its clean burn system and because it provides a vibrant flame without the need for fluing. The XL900 burner perfectly fitted the 1500mm fireplace opening and produces an animated flame that scales perfectly within a large fireplace setting.

A passionate collector of Art Deco, Dr Pajouhesh had the perfect centrepiece for his fire – a hand crafted bronze spelter, bronze sculpture of Warrior Confronting Beast (circa 1932), the year the Manchester Unity building came to life.

The fireplace and bronze sculpture are situated below a display of religious icons to provide a ‘symbolism of life.’ A polished black granite plinth was custom made to provide the platform for the ‘struggle’ of man versus beast, and a structure for the EcoSmart Burner discreetly inlayed into the stone behind the sculpture.

The installation of the burner was simple, and the result is an interplay between the two key elements that is both effective and dramatic.

Thanks! We received your enquiry. We'll have the best person connecting with you.
We aim to get back to you in under 24 hours - if this timeline doesn’t suit your immediate needs, please do not hesitate to contact us by phone 0333 444 0623.
Look Book #3 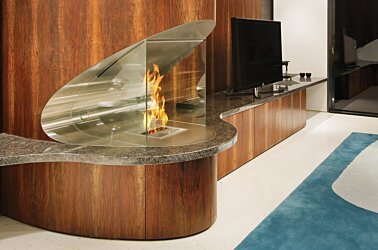 Shape Shifter When designing a contemporary new single dwelling from scratch, architectural and interior design firm SAAJ Design in Melbourne was given carte blanche to celebrate as many design opportunities as possible, creating a highly private home with strong connections to the exterior. 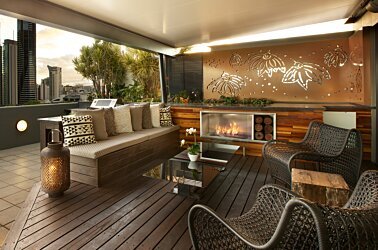 Outdoor Room The brief was clear: to create a cosy environment in an open, exposed space on the terrace of a Brisbane high-rise apartment. “Our clients wanted a cosy, intimate yet open space where they could sit quietly or entertain,” explains Carole Hood from Multi Span Australia Group, which undertook the design and construct project. “The design had to be modern, with an oriental flare, allowing the inside to flow out.” 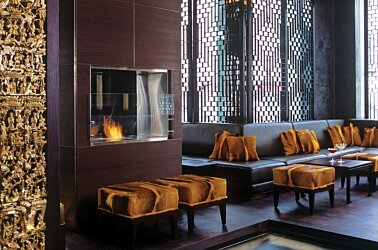 Mixology Mecca It’s described as one of Berlin’s top 10 cocktail bars, and the Shochu in Berlin is fast becoming as well known for its classic and exotic cocktails as it is for the sleek and sophisticated interiors. Located near the Brandenburg gate, in the Adlon Hotel and adjacent to the renowned Uma Restaurant, Shochu was created by acclaimed designer Anne Maria Jagdfeld. 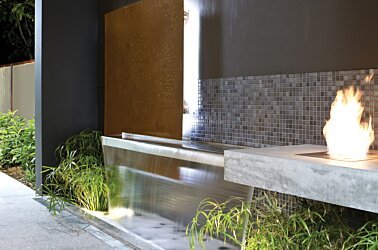 Fire and Water MiCorp is a Sydney building company with a clear objective – to build and provide quality homes and renovations with a personalised service that exceeds expectations. Not a declaration to be made lightly, MiCorp prides itself on listening to clients to together create beautiful architecturally-designed homes, renovations or landscaped gardens. 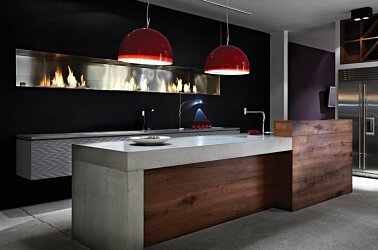 Best In Show A new house, commercial premises – and everyone has the same dilemma: Will the colour scheme create the right ambience? Will the new piece of furniture work in the new room? It’s the reason why interior design guru Carsten Batterman has created a purpose-built design studio where architects, interior designers and builders alike can visit, see innovative products in situ and be inspired. 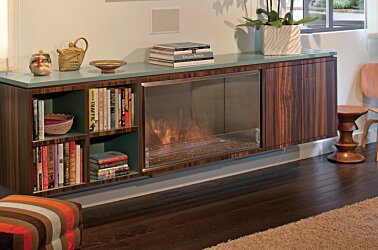 Fire Furniture Design professional Susan Jay has a simple design philosophy: “I believe my clients’ lifestyle dictates the design,” she says. “The design is a portrait of their lifestyle.” 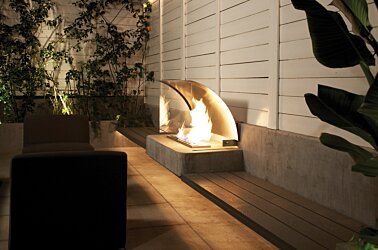 Iconic Arcs The iconic outdoor amphitheatre the Hollywood Bowl in Los Angeles is as renowned for its live performances as it is for its architecture – a ‘band shell’ comprised of a distinctive set of concentric arches. It was also the key driver for a third generation Southern Californian resident who wanted to transform her backyard. 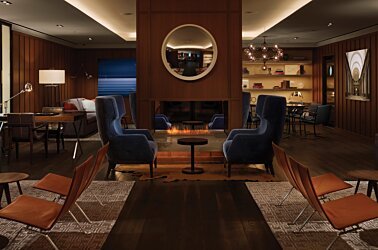 Home away from Home A cosy, beautifully designed resident lounge in a boutique apartment hotel in New York City has an open fire with elongated flame as the centre element.
Contact Us Our team of fire specialists can clarify
any questions you may have.

Business Programs Exclusive programs designed to fit the
needs of our valued partners.

Downloads Designed to inspire and assist you
with the product selection

Why Flex? A great interview that explains
the main benefits of Flex.

Yes! We got your message. Our team
will get back to you soon.